2012 MEX/L.A: Mexicano Modernism(s) in Los Angeles, 1930-1985, focuses on the construction of different notions of "Mexicanidad" within modernist and contemporary art in Los Angeles.Museum of Latino Arts MOLA, Long beach, CA.

2003 Returning to Aztlan, The dA Center for Arts, Pomona, CA

1994–95 I Bienal de Pintura Mexicana y Chicana “First Biennial of Mexican and Chicano Painters”, sponsor--Institute of the Mexican Consulate of L. A . Traveling Group Show first exhibited in LA, then to various cities of Mexico. Special Mention: Indicating in the manner that digital technique can be accepted as painting.

2012 MEX/L.A: Mexicano Modernism(s) in Los Angeles, 1930-1985, focuses on the construction of different notions of "Mexicanidad" within modernist and contemporary art in Los Angeles.Museum of Latino Arts MOLA, Long beach, CA.

1980–81 Chisme Arte with The Los Angeles Latino Writers Workshop: Publisher and Art Director of ‘L.A. 201’ Bi-centennial. A collection of literature & visual art of Los Angeles. Sponsored by Self Help Graphics.

Presently, Bill and Pamala Bejarano have dual residencies in Todos Santos, Baja California Sur, Mexico and have a US residency, Laguna Hills, CA.

I was a founding member Chicano Street Arts Movement and The Los Angeles Latino Writer's Workshops and a proponent of California Arts Council in part of a coalition of community artists & art centers.

My artwork can be found at the Latino Art Museum in Pomona, Ca. And Smithsonian, Our America: The Latino Presence in American Art in Washington, DC.

I received a BA in Painting/Fine Arts from the California State University, Northridge (CSUN) and a second degree in Mexican American Studies. During my time at CSUN, I was given the opportunity to study in a ‘special elective’ internship in Mexico City under the direction of David Alfaro Siqueiros, a renowned muralist artist. My study of the Visual Arts of “las Americas” was a testimonial to my achievements in American Arts (USA).

After my graduation from the CSUN, I was an Art Director for several commercial and literary magazines. 1989: I attended the University of Southern California, School of Business. I was the owner of a graphic arts, printing, website and marketing business. I was Regional Technical Service Representative for A.B. Dick Co. (An international manufacture of printing equipment)...Retiring, I pursued the fine arts in painting. I was offered Artist-In-Residentship at the California Museum of Photography and awarded honors with distinction in digital arts. My wife Pamela and I moved to Todos Santos in September 2010. We still have limited residence in Laguna Hills, Ca.

The Long Beach Grunion Gazette Newspaper wrote an art critique described my paintings as archetype in Jungian psychology: a primitive mental image inherited from the earliest human ancestors, and supposed to be present in the collective unconscious which evoke conception of deep emotions.

I have a varied interest in abstract-figurative painting. I like to paint landscapes in the form of a silhouette, cosmic matter, atmospheric force, shape and color. My interest includes organic and allegorical forms *. Expressionism is my natural aesthetic penchant for abstraction and figurative paintings.

We received financial support by the California Council for the Arts, the National Endowment for the Arts, New York Coordinating Counsel for Small-Press Publications, and from City and the County of Los Angeles.

In 2012, KCET-TV did a presentation on the history of Highland Park, Ca., called Departures. I was invited to share my involvement with the Public Art Center (late 1970’s to early 1980’s) in a video presentation which can be found at their KCET’s website. 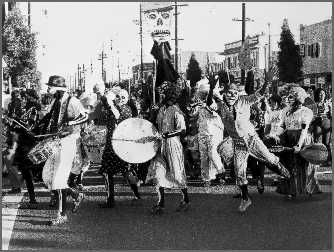 contact me / résume / my artwork / murals / my collection / annex / cap.archives